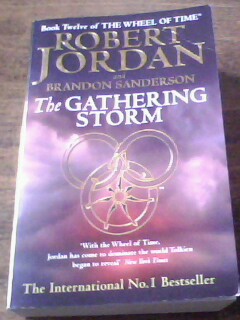 Rand was certainly the whiniest he’s been in this series, but just when reading his chapters was starting to become a chore, I was plesantly drawn back too his lighter side (it was nice to see the old him poking through, I was beginning missing it). If there was more focus on Rand than I think I wouldn’t have been able to carry on through the whole 766 pages, but those heavy pieces were wonderfully interspersed with Egwene and Mat and, to a lesser extent, Aviendha, Nynaeve, Min and Cadsuane.
Several pieces had me laughing (like Cadsuane spanking a Forsaken). Others had me sitting until quite late with their intensity (I couldn’t leave until I found Egwene was safe after the tower attack). And a few of my suspicions came true (like who was the darkfriend). Many of the plots laid out in even the earliest books are finally starting to come to a head. Not all the loose ends have been gathered yet and I was still left with questions, but that’s to be expected with two more books to follow.
Wonderfully done and harks back to the feel of the earlier novels. Am definitely eager to get started on the next book.