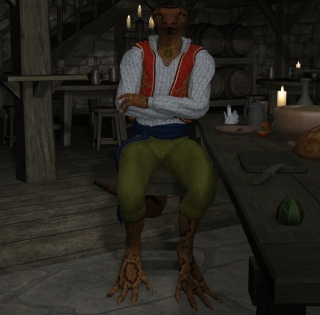 If you’ve got a city, especially and big city, you’re gonna have thieves somewhere. It’s a given.
But, in most of the stories I’ve read, the thieves are always helpful. Half the time, it’s the Big Cheese him/herself who does the helping. Sometimes they’ll even risk themselves for the Main Characters. And there’s the guild. There’s always a guild, yeah? There’s guilds out there even now, they just aren’t called that. And, in my mind, if you’re going to have a den, you better be ready to defend it, or have a good escape plan.
I never saw the head man of my little guild being all that nice. But then, when the law says thieves are to be blinded, you don’t have much room for nice. You’ve got cunning, though, along with threats and blackmail. Besides, I love it when I read a character who’s pleasant until the MC tries to veer off the path they want you to take.
My only regret was not having the opportunity to use him for more than one scene.

What can I say about the image? I like how this turned out. The original Scarp had horns, with bands and jewels. Then I saw just how many of them already had horns and dehorned him. ^_^