Thanks to T. B. McKenzie over at Magickless, author of TheDragon and the Crow, I’ve even got the sign to prove it. Isn’t it pretty? ^_^ 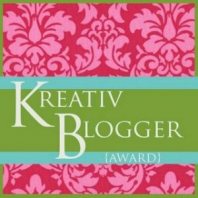 With it, I’m supposed to list ten things about myself and pass it on to six other bloggers. Not sure how interesting those ten things will be, but okay …
1. I’ve a deep-seated love for dragons and little ponies. I seem to have unwittingly passed this on to my daughter as she now owns a bigger collection than I ever had.
2. My favourite colours are blood red and black. No I don’t dress like that … okay I do lean towards a shadowy ensemble. Though I’m not shy of some shades of purples, I draw the line at pink.
3. I hate arriving late. Anywhere. Come to think on it, I don’t like being just in time either. Early is what I’m gettin’ at.
4. Despite trying, I just cannot seem to write YA. I put this down to never being one. ^_^
5. I like to put my things in certain places. My other half says I’m compulsive, but then I’ve never lost the car keys.
6. At last count, I’ve around 377 books (not including my other half’s meagre collection). A large portion being fantasy or science fantasy. Then again, I’m still looking for 200 more books. However I’ll manage to find the time to read’em all is another matter.
7. On the other hand, I’ve ten eBooks. (Guess who got a kindle for Christmas!)
8. I’ve a fear of going up ladders. Yet I’m fine with most heights.
9. I used to be able to watch horror/thrillers without restless sleep, not nightmares per se, just a disturbance in my deep REM. Last such movie I watched was The Grudge.
10. We’ve a pony called Rabbit (it came with the name). Figure that one out.
Now for some people to give this award to …
S. B. Stewart-Laing over at Writing the Other. If you don’t follow, you should.
Rebecca Enzor. You just know her pony custom of the week is just feeding my pony addiction. ^_^
Jillian at Writing on a Limb. Because rejection really is for the bird. ^_^
Angela Cothran, Sara Bulla and Amy Dahkle at Live to Write … Edit when Necassary. Because, seriously, all three deserve it.

8 thoughts on “I is Kreativ”

Extras for In Pain and Blood – MM Spellster Snippets [Plotting]