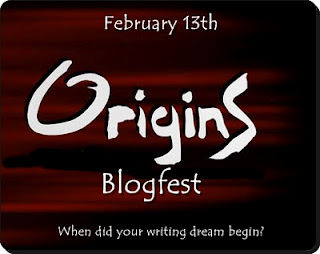 Tell us all where your writing dreams began. It could be anything from how you started making up stories as a child, or writing for the school newspaper, or even what prompted you to start a blog. How about stories about the first time somebody took an interest in your writing, or the teacher/mentor that helped nudge you along and mould your passion, or maybe the singular moment when you first started calling yourself a writer. It all started somewhere and we want you to tell us your own, unique, beginnings.

I always used to write as a kid. Sounds so commonplace, don’t it?
Yeah, there I was: scribbling little things as a child, making up stories and stuff about ponies, but nothing that could be coherent (or original) when written down. At age ten/eleven, I drew a lump of a fortress in a desert. Almost a mountain really. Something akin to Uluru, only filled with tunnels and pockmarked by windows and balconies. The desert and its people grew from there. Then it got walls and a monster of reason for those walls. Let’s just say it wasn’t a PG world.
Back then, I wasn’t 100% certain what was beyond those walls, even when my doodling ended up with a rough map. Undeterred, I called the world Thardrandia (did I make you look up? ^_^) and fluffed about trying to find a used for it.
I formed a few half-baked stories. Seriously bad ones. I think they might still be kicking round somewhere in hopes I’ll redo them someday. Then I began RPGing on it with a friend I’ve since lost contact with. I suppose that could be called my first foray into world-building as we sort of made it up as we went along, she with her world, me with mine. It was fun. It let the seed of an idea quietly germinate.
It was when I tried to write a backstory for the characters I was using that I got seriously bit by the writing bug. I kept the idea, tore the story to pieces, redid it (several times) and have since moved on to all the stories you can find on the My Stories page.
That’s it. That is my writing origin. Go here and discover how others got where that are.