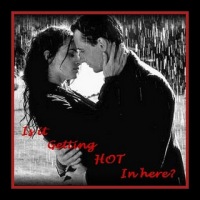 Today’s bloghop is courtesy of Cassie and Hope.
Please share one of your favourite kissing scenes from a book you’ve read, from your own WiP, make one up, or write about one of your own memorable kisses.  Then hop around to feel how sweet, romantic, or downright steamy other characters are getting smooched!

Took me a while to decide which scene to use for this one. I’ve never realised how many kissing scenes I had until then. Honestly, they turn up in every story I write, the only exception is my short story.
Anyhow, I finally settled on Dragon. 300 words, two kisses. ^_^

Maay pressed her cheek against his chest, bare save for the half-cloak vest he favoured. He felt so warm and his arms … she’d been right about there being more strength in them than their appearance gave credit for. If he held her any tighter, she was surely going to break.
“I thought I’d never find you,” he whispered, his breath tickling her ear.
Maay looked up at him. His face bore fresh scratches, but those blue-grey eyes of his no longer looked so icy. He had come after her. He’d discovered she was here and had still come for her.
Chest feeling as if it would burst, she cupped one side of his jaw. Tiny hairs, downy to the touch, brushed against her fingertips as they slid up to rest against the lobe of his ear.
His eyes closed. She could feel her belly, still pressed against his, growing hotter. Maay tipped forward onto her toes, pressing their lips together.
Jaimin’s whole body stiffened under her arms. He jerked his head back, eyes wide and mouth dropping open.
“I’m sorry,” she mumbled, her face growing almost as warm as her stomach had. She’d never kissed anyone before. What was she doing being so forward? “I didn’t mean to –”
He silenced her with a single finger on her lips. The shock had vanished from his face, replaced by an almost shy, lopsided smile. He placed his hand under her chin. “I believe it is done like this,” he murmured, tilting her head as he bent his.
Their lips met again. The heat against her belly flared to life once more, dancing on the edge of unbearable as he pulled her closer. She leant against him, draping her arms over his shoulders, unsure if her legs would keep her upright.