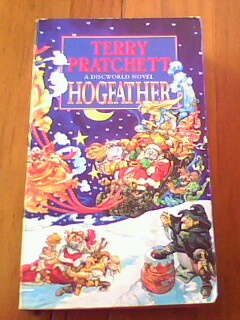 HO. HO. HO.
I’ve watched The Hogfather so many times. It’s practically becoming a Christmas tradition for me. Naturally, I’ve been both aching and dreading to read the book. I just knew I’d end up comparing them to each other.
So I was pleasantly surprised that they hadn’t altered the story too much for TV. Of course, there are extra scenes/characters that didn’t make it onto the screen, which makes the book more enjoyable.
Mr Teatime is well … he’s weird in the movie. In the book, he’s downright creepy. Even with knowing what’s going to happen in the end, I’m just waiting for him to jump out and do something unexpected.
Death is as enjoyable as ever. Though his inability to get the mixed ideals behind Hogswatch is a bittersweet thing, I’m sure he instilled a heavy dose of belief while out and about as the Hogfather. At least, a heavy dose of something. ^_^ Belief is an important factor in this book nevertheless.
And then there’s Susan … I wasn’t sure about this character the last time I’d a book with her in it (Soul Music). But she’s much better in this. A good person to have in dealing with Oh Gods, childish old wizards and an insane assassin bent on taking over the world with teeth.

4 thoughts on “Review of Hogfather by Terry Pratchett”