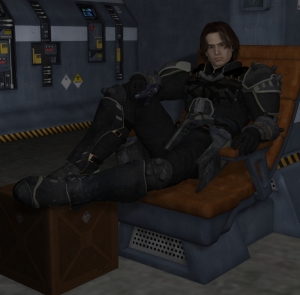 What’s this? A human in my non-human story?
Well, he’s one of four humans on the planet. He, like the others, is a catalyst … of sorts.
Though not in the way the other three are and more in a way that leads to greater things happening.
I see Kyle as being the one in the group you didn’t want to survive (at least I didn’t) and yet, by sheer dumb luck, he happens to be in the right place and does. I’d have much rather another scientist had survived than this trigger-happy twit. Still, in a place where the immediate terrain isn’t exactly welcoming, it’s best to have a gun-toting, shoot’em if they move guy around.
Surprised me a little that he let my poor Main Characters – Veng and Lasil – live at all, let alone as long as he did. Then again, I reckon he mellowed with age when it came to Lasil.
Still, his ending gladdens my heart.

I wonder if it’d kill the guy to smile. Hmm … that’s probably quite possible.