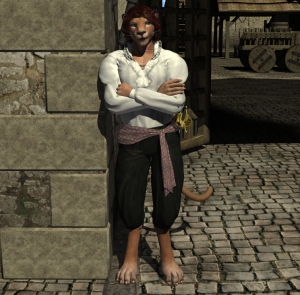 As father to one of the Main Character’s love interests, there’s more hearing about Lokter than actual seeing. There once was a scene where the prospective son-in-law came face-to-face with him and his wife, but now … it’s just a few mentions and a report of daddy being seen at this place and that trying to track down his daughter. But then, arriving to pick up your eldest child only to find she’s been ‘kidnapped’ by a man belonging to a group who are legendary for murdering women, amongst other things, would have you do that.
Though his part was diminished, I quite like how the traditions of his kind went through each rewrite unchanged. ^_^

I’m in love with his earrings, even though you can’t see them all that well. Sometimes I wish I’d made all my characters this species just so I could adorn them with earrings. Although, they took me forever to get them looking right and, after the fourth one, it made me wonder why I gave him so many darn kids.