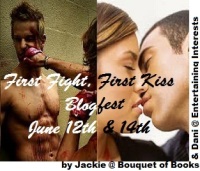 The First Fight/First Kiss blogfest, hosted by  is live. Don’t forget to pop over to either Dannielle’s or Jackie’s blog when you’re finished to read other people’s excerpts (or maybe you might a real life fight scene O_O).
First up: The Fight Scene.
It’s a good thing it doesn’t have to be a physical fight. Which is what I sort of suck at (they tend to be way too short). It’s an area I’m endeavouring to improve.
I stared at my stories for ages. Flicking between this one and that. You know what I noticed? My characters bicker amongst themselves like crazy. I’m not meaning full-on rows, though there are some of those too, just bickering. Especially in my first story. ^_^


Anyhow, here’s a fight, of sorts, from my current WiP: Dark One’s Mistress. Here, Clara has been escorted to the training grounds after being previously kidnapped, chosen and imprisoned in the Lord’s citadel.
Sorry about it being so darn long. It’s not the whole chapter, really. Well … about half. I don’t like cutting things off.