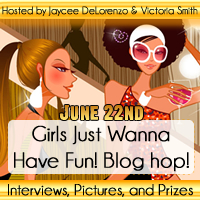 Bet you’ve got that song in your head now. I know I did. ^_^
This is the heroinebloghop. A counter, if you will, for the “Oh! My Hero!” Bloghop that Jaycee DeLorenzo and Victoria Smith hosted in April. We can’t let the heroes have all the fun, now can we?
Interview a heroine of your manuscript, novel, or WIP by a fellow female counterpart also from one of your written works.  Your featured heroine can be interviewed by her best friend, a heroine from another one of your written works, a sister, the opportunities are endless!
– Have your heroine answer at least threeof the questions!
– Post a picture of your heroine, the interviewer, or both!
– Post a song for the theme of the interview or a song that reflects your featured heroine’s personality.
For this hop, the interview will have more of a “girls chatting” type feel because after all, Girls Just Wanna Have Fun!  So feel free to write it like a short scene in a book!
And I did. Sort of. Some personalities seemed to clash a bit so it got kind of long (about 2200 words). I also couldn’t let any of them sit by the wayside for this. So sit back and get comfy, this’ll take a while, there are eight of them, after all ….