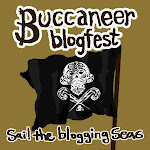 Looking for the Hangers part of the Hookers and Hangers Blogfest?
Since I used Anubis’ Handmaiden for the last prompt, I thought I would use a different WiP for the character interview part of the Buccaneer Blogfest (although I was very tempted, I shan’t be interviewing Veng again). So join me as I hop, skip and jump into the world of Dark One’s Mistress.
Because her answers would likely be different at both the beginning and the end of the story, I’ll be doing the interview with the her that she would be throughout most of the book.
And here she is, the mistress of the title, Clara.
Right girl, get yourself comfy and I’ll try to make this brief.
Take your time. It’s not as if I can just up and leave. How did you get in here, anyway?
Hey, I’m asking the questions and number one is: What do you want more than anything in the world?
Well, it used to be to leave Everdark and my mother behind. To visit other lands. Now, all I want is my freedom. The choice to choose. That’s what I want. He shouldn’t be able to do this.
I see. So what is your biggest fear?
Sweet goddess, I’m terrified that he’ll wear me down and I’ll be stuck here. I know I promised I wouldn’t try to escape, but he had Tommy. What else was I supposed to do? Surely, I can’t be held to that. You can get me out though, right? You got in, you can get out.
Uh … if you could change one thing about yourself, what would it be?
That I didn’t have this hair colour! He wouldn’t have picked me if it wasn’t for this horrible hair of mine. Look at it! It’s one of his favourite colours! Why couldn’t he have liked green? Or preferred brunettes?
If you found a genie in a magic lamp, what would your three wishes be?
What’s a genie and where can get one, because my first wish would to be somewhere far from this place. My second would have Tommy being free and with me, just to keep him safe. And, lastly, for him to never be able to find us. That’s all three right? You sure I can’t have another?
Sorry, only three wishes per genie. Last question: What do you think of Lucias?
What do I think? What do I think? He’s an arrogant, egotistical, smug, kidnapping … I don’t know whether I want to slap him or … or … he just makes me so angry. I mean, one minute he’s saying I can’t leave and I have until the new moon to decide when I’ll come to him, the next minute he’s being so … nice.
I’ll just leave you to your ranting then (I should’ve interviewed him, he would’ve been more stable).