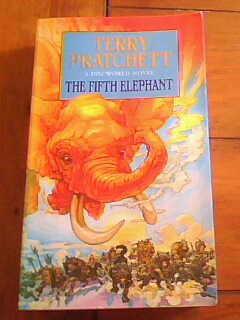 From vampires in Carpe Jugulum to werewolves. This time it’s a trip to Uberwald to see the new dwarf king being crowned and, with Vimes playing ambassador to Ankh-Morpork I knew this wasn’t going to be a cut-and-dry event. Especially when he’s bringing Detritus and Cherry into the fray. So I was all geared up for a good read.
I wasn’t disappointed.
As so often with the Watchman books, there’s a heavy mystery going on underneath (literally in this case, we are dealing with dwarves here). Somebody’s stealing stone scones that are big enough to serve as a chair. Wait … no they aren’t. In fact, we’re not even having this conversation. How foolish to suggest it. People are certainly not stealing scones. And they most definitely aren’t trying to start a war amongst the dwarf factions.
But as I said, there are werewolves. Angry werewolves. Spearheaded by Angua’s family, most notably, her insane brother. To say the boy’s got a serious problem is putting it mildly.
Of course, there’s stuff going on at the home front of good old Ankh-Morepork, but as the mystery gets on, the ‘little stuff’ they were dealing with back there seemed rather dull and I completely forgot about it (as you would when dealing with werewolves) until the end whomped me with the ‘little problem’.
On the other hand, I’m starting to see Carrot in a different light.