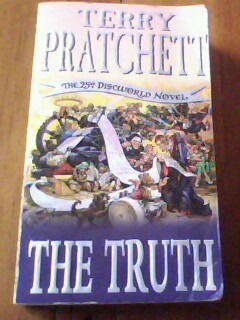 I’ll say this now: I adore Otto Chriek.
Yes, I know he’s a vampire. And yes, I do know he’s a secondary character, but I can’t help but love the iconograph-taking non-blood-drinking vampire who turns to dust every time he takes a photo. How could you not?
Anyhow, this novel is all about the Press. Or, rather, the Times and moving with it (before it runs you over and leaves its mark on you). A lot of this is about William de Worde (a fitting name, don’t you think?) and how he first struggles to bring AnkhMorepork’s first printing press into being, then keeping it running when a lot of people would much rather he stopped.
But it also follows two rather sinister fellows Mr Tulip and Mr Pin as they get tangled in the mess that always seems to be going on in what has to be my most favourite storybook city. I quite liked Tulip, even if he goes “–ing” a lot (no actual swearing, just “–ing”, trust me).
All in all, it was good read where the more common characters take a bit of a back seat to a more humdrum side of the city that’s anything but boring.
And come on, you can’t resist Otto and his dark light eels. ^_^