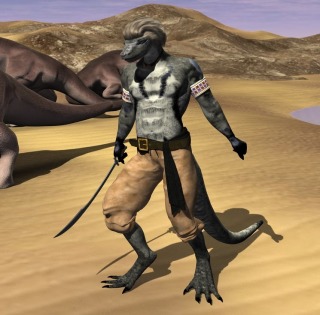 Jusal really only shows up the once, but his actions do bring about several occurrences, even if my Main Characters have no idea of the link between a few of the other characters (at least, not in this series).

I debated on whether to put a shirt on him or not, obviously went with the latter for a number of reasons.

Those things in the back are meant to be walfres, my lizard-like desert creatures, but since I haven’t found anything close to resembling them…