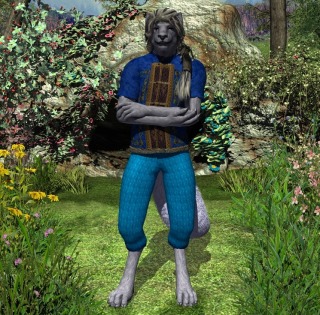 Technically, Sarch is only named in The Shadow Prince, but he’ll make a full-on appearance in the Godless Series. He’s one of the few of his species left (full shape shifters), he’s also about 150 years old. In terms of character developing, he’s one of the older ones, coming to life in a pitiful story that’s almost as old as The Rogue King Saga itself. I may even rewrite it one day and tell how he and his lady-love became the rulers of two kingdoms.

Outwardly, Sarch is an arrogant creature and not at all impressed with the reputation of a certain giant lizardman. Inwardly … well, I’m sure he’s more than a touch jealous of Veng in some things.

This isn’t actually a depiction of Sarch as himself, but rather as he prefers to appear to make others, mainly his wife, more comfortable. His natural form is rather large and … insect-like. And seeing I suck at drawing…