Be sure to pre-order your copy today!
Amazon

There are secrets, there are betrayals, and there are sacrifices…
The Behemoth has been destroyed, and the bloodthirsty Hellions seem to have left Westraven. But Claire Abernathy’s mind is not at ease. A terrible disease plagues her sister, appearing to have been brought on the Vesper, the leader of the Hellions beyond the tear between worlds­– the Breach.
The only chance Claire has of saving Abby and stopping the Hellions once and for all is to find the machine her parents began to build before the attacks, and hope to fix it before the monsters return. To do so, she needs the help of her crew, and must ignore the secrets and rivalries between her captain and the man she saved.
Because the Hellions are not the only dangers following Claire. Twisted humans and old enemies surface to stop her and destroy all she loves. While she is determined to endure the trials, a single betrayal could shatter the hope of a better world, and force Claire to make a choice that will cost her dearly… 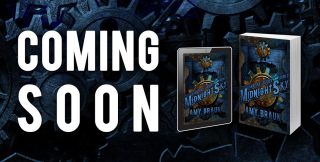 Amy is a Canadian urban fantasy and horror author. Her work revolves around monsters, magic, mythology, and mayhem. She started writing in her early teens, and never stopped. She loves building unique worlds filled with fun characters and intense action. She is the recipient of April Moon Books Editor Award for “author voice, world-building and general bad-assery,” and the One Book Two Standout Award in 2015 for her Cursed trilogy. She has been featured on various author blogs and publishing websites, and is an active member of the Writing GIAM and Weekend Writing Warrior communities. When she isn’t writing, she’s reading, watching movies, taking photos, gaming, and struggling with chocoholism and ice cream addiction.