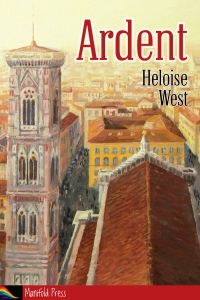 In the village of Torrenta, master painter Morello has created a color that mimics the most expensive pigment of all, the crimson red. Master Zeno, from strife-ridden Medici Florence, tells him the color gives him a competitive advantage – but Morello must be careful. Fraud is ever-present in the dye and pigment markets.

As they work together in Torrenta, Morello falls hard for Zeno’s assistant, Benedetto Tagliaferro, a young man of uncommon beauty and intelligence. Benedetto is still fixed on his old lover, the master painter Leo Guisculo, and cannot return Morello’s affections.

But when Leo dies in a terrible accident, it’s to Morello that Zeno and Benedetto turn for help. And Morello soon finds that in Florence, every surface hides layers of intrigue.

The village of Torrenta, Tuscany, June 1475

The sun thrust warm fingers into the ancient Tuscan earth. The gray-green leaves of the olive trees shimmered, and the woods beyond beckoned Morello to abandon the painters’ workshop for their cool refuge.

In the growing heat the apprentices inside settled into an afternoon nap, curled on benches in dark corners behind him. The harsh fumes of linseed oil and varnish had irritated Morello all morning, and he was unable to sleep in the miasma. Perhaps before their visitors from Florence arrived, he might escape the heat. A long tramp in the woods pulled at his bones.

He reached for the walking stick behind the door, but a horse’s whinny stopped him, and a man’s voice called out. When no one stirred within to answer, he cursed the sleepers and stomped back through the shop, thwarted. In the lane in front of the workshop, two men removed packs from their horses.

“Good day, Master Zeno!” From the doorway, Morello called to the older of the two. “You made good time!”

At the sound of Morello’s voice, the apprentices roused themselves from sleep and peered around him.

Master Zeno’s companion, a tall young man with flowing golden hair, took the older man’s pack for him and shouldered the straps of both.

“Take their horses to the stable and fetch Master Franco,” Morello ordered the apprentices, and they hurried to obey.

Master Zeno’s journeyman brushed dust from the sleeve of his sweat-stained linen shirt, slapped more dust from his long thighs, and ran a forearm across his brow. His smile was uncertain as his glance met Morello’s.

Donato stood at the window yawning and scratching his stomach. He shaded his eyes for a better look into the misty glare of the afternoon. “Who’s the beauty with the master?”

Donato’s fellow journeyman Primo jumped to his feet and crowded against Morello in the doorway. “Can it be? He’s brought Tagliaferro?”

Donato groaned. “The man you’ve been mooning about since you last went to Florence, Primo? You’ve only just finally shut up about him.”

Morello ignored them. His irritation over his interrupted walk had vanished. Primo’s garlic- and onion-laden breath on his neck registered only remotely. He gazed out at the man from Florence, who, in Morello’s memory, had once been a long-legged boy with a head of yellow fluff too big for his skinny body. Morello stepped out into the sunlight that appeared to pour itself over the grown man, and stretched out his hand in greeting. Maintaining frank eye contact, Benedetto Tagliaferro adjusted the packs and took his hand.

When flesh met flesh, Morello stumbled – at least, his heart did. As if the wind from the beating wings of the love-inspiring putti he had painted just that morning pushed them toward each other.

“Do you remember me?” Benedetto asked with the shadow of that boy’s grin.

Heloise West, when not hunched over the keyboard plotting love and mayhem, dreams about moving to a villa in Tuscany. She loves history, mysteries, and romance of all flavors. She travels and gardens with her partner of thirteen years, and their home overflows with books, cats, art, and red wine.