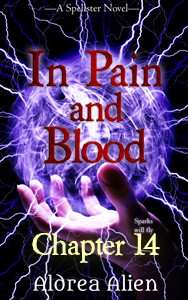 This, my Weekend Writing Warriors and Snippet Sunday Folk, will be the last teaser from chapter 14 of In Pain and Blood. The chapter will still be available through signing up to my spellster series exclusive newsletter until the end of May.

Blurb: When a routine inspection goes awry, Dylan is left unleashed and alone. Afraid he’ll become prey for the King’s Hounds, he struggles to make his way back to the only safety he’s ever known. Or is it?

The grey light of predawn stained the tent sides. Outside, he caught the birds chirping and whistling their morning cries. No Authril. Had it been a dream? His memory was certain she’d entered his tent last night. His body insisted she’d done more than that.

He scrubbed at his face and glanced down. Well, he was most certainly naked and didn’t tend to sleep in such a fashion, keeping on his smallclothes even through the hottest of nights. That just left the possibility of her fleeing whilst he slept. Not the best option, but he’d had worst.

Do follow the links above or check out the Rainbow Snippets, a Facebook Group where people post pieces of their LGBTQ+ novels, to see other snippets.