So, in my last I post, we’d a very damp kitchen floor, courtesy of a cracked pipe. It’s been slow going with the insurance. I’ve not had much to do with insurers (beyond one car crash that wasn’t my fault and I mean literally, the guy hit my stationary car at 100km) so I was assuming the timeframe was normal.

When were sent an update email, I was thrilled. Finally, we’ll get some traction and be walking on a new floor without any disturbing bouncing or rises. We’re fully prepared to deal with painting or whatever it takes to get back to normal. I’m not liking being uncertain how much of my under sink cabinet space I can reclaim knowing it’ll only have to be removed once they start.

Then I read this little gem…

The vinyl on the kitchen floor contains asbestos. 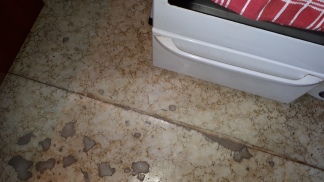 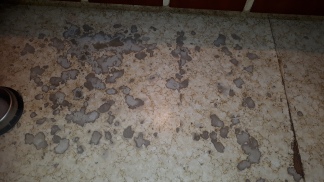 Our utter mess of a kitchen floor.

Yes, the floor I have walked on since 2001 contains that terror of the building materials. We’ve spoken of tearing the stuff up in the past because it’s in such a terrible state. Kinda glad we hadn’t gotten around to doing that.

It gets better. Or rather… scarier. Our laundry and dining room have the same stuff. Although the former has very little left thanks to a certain blond dog when he was puppy. But there’s also a possibility that our textured walls and ceiling also have it. We’ve cut holes in those walls (the ceiling, too) and nailed hooks into it. We don’t know if it’s anywhere other than the floor. I do, however, know the stuff under my chair is shattered and flaking…

2 thoughts on “Well… that escalated…”