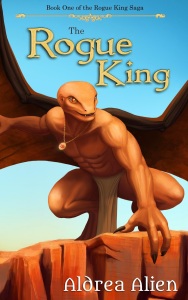 Such is the warning Koral has heard for twelve years. Born a product of genetic manipulation, he knows little else of the world beyond the steel walls of his home.

When fate gives him the choice between certain death and the unknown, there’s no question in what he must choose. But he’s about to find out the sands he must brave are full of more than mere monsters.

This is a world ruled by instinct, where innocence is drowned in blood. Here, men are offered up to the great Serpent God, Lorric, only to emerge as the most feared killers on the planet: The Rogues.

With the god’s sights set on turning Koral into a legend, he must sacrifice himself to survive and be reborn as… The Rogue King.